What Is The Candida Breast Cancer Connection? 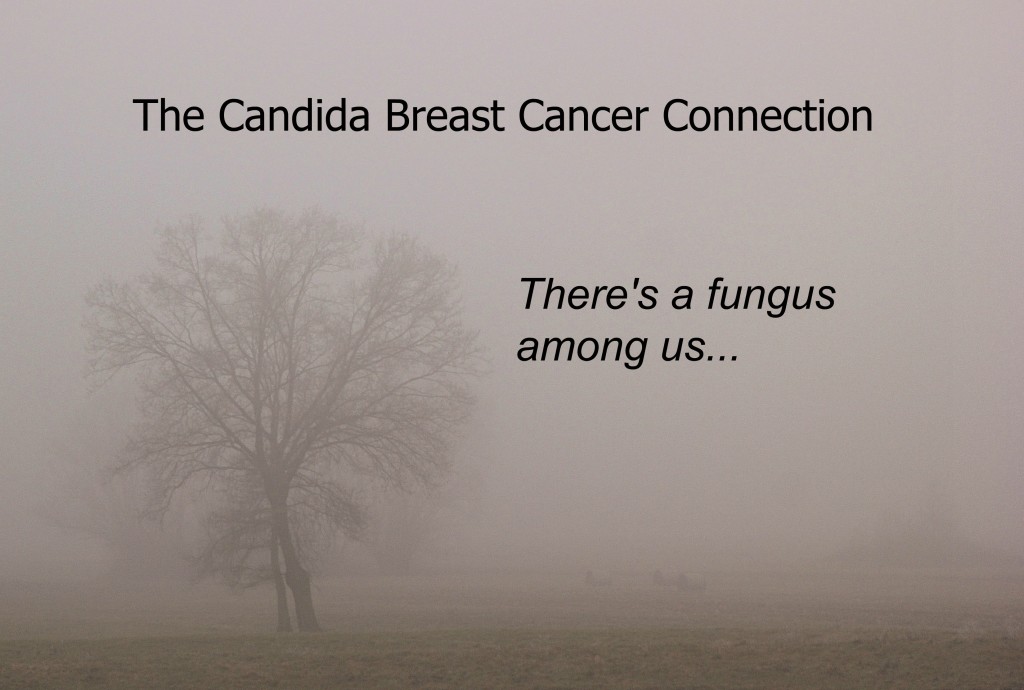 What Is The Candida Breast Cancer Connection?

Did you know that there is a connection between candida and breast cancer?  A large percentage of women diagnosed with breast cancer also have (or have recently had) an overgrowth of candida albicans, a fungus.  It may seem weird but read on and I will explain.

My Own Story With Candida

I had systemic candida the year prior to my breast cancer diagnosis.  I never thought much about it until I delved a little deeper into what might have caused my breast cancer.

I believe my house was the initial causative factor, as odd as that may sound, because I didn’t have any of the other risk factors for candida.  In the winter when it would rain hard, our house gutters would overflow and some of the eaves that jutted out all around the house would turn black with mold on the underside because they were constantly wet.  Environmental mold is definitely a causative factor for candida.

Getting rid of the mold was difficult and getting rid of my systemic candida proved to be just as difficult! Following the anti-candida diet was probably one of the hardest things I’ve ever done, but I had to in order to get well.  I believe that the candida undermined my immune system to a huge degree and could have been what let cancer in the door initially.

The Problem With Candida

It has been estimated that approximately 80% of the American population has a problem with candida.1  Candida albicans is a fungus that lives in the mucosa of the digestive tract.  It is normally kept in balance by beneficial gut bacteria, but an overgrowth can develop in the body as a result of many things (see below for more information on what can cause an overgrowth).

Candida tends to attack the entire digestive tract from one end to the other and some of the symptoms include a burning in the stomach, especially after eating something sweet or vinegary, lethargy, brain fog, mood swings, little bumps on the roof of your mouth, a coated tongue, and a few other unsavory things including vaginal yeast infections.

Candida albicans thrives (much like cancer) in an environment of acidity and low oxygen and produces toxic chemicals that can feed and stimulate cancer cells and weaken the immune system – it is disastrous for the immune system.

Many natural therapists – and even a few doctors I’ve run across – believe that cancer really began as a fungal infection, that the immune system has interpreted the fungal overgrowth as an extraneous foreign body and this stimulates the formation of a cyst in order to encapsulate the invader, as a protective mechanism.  This is an oversimplification for what is a quite complicated process but you get the picture.

Go to any alternative cancer clinic and they will tell you that in order for the cancer patient to heal, their candida and fungal problems must first be addressed.

Candida can become rampant due to many things and this is not an exhaustive list: poor diet (especially too much sugar), an overabundance of stress, acidity, overuse of antibiotics and other prescription drugs, too much alcohol, contraceptive pills, hormonal imbalances, amalgam dental fillings, chlorinated water, environmental molds, diabetes and a few other medical conditions.

The traditional treatments for cancer don’t help either.  Chemotherapy and steroids serve to  heighten the effect of a candida overgrowth.

Antibiotic drugs kill the good bacteria in the gut, which can lead to an overgrowth of candida.  The Journal of the American Medical Association reported a study in 2004 on 10,000 women who took over 500 days of antibiotics in a 17-year period.  These women had twice the risk of breast cancer as those who took no antibiotics.  Women taking just one dose of antibiotics also had an increased risk 1.5 times greater than those who did not. 2

A 2008 Finnish study followed over 3 million people aged 30-79 years, with no history of cancer, and found that antibiotic use did increase the relative risk of getting all sorts of cancers, including breast. 3

How To Tell If You Have Candida

A simple test to do is the saliva test.  I will forewarn and say this is NOT conclusive, but it can certainly give you an idea of whether or not you may need to seek treatment for candida.

A small percentage of people with candida CAN still test negative with this particular method, but most people with chronic candida infestations will have a positive result with this test.  Give it a try.

Prior to putting anything in your mouth first thing in the morning, get a clear glass and fill it with ordinary water (or better yet, have this glass of water available before you go to bed so that it’s there waiting for you and you don’t forget it).  Get together a good sample of saliva and spit it into the glass of water.  Check the water every 15 minutes or so, and do this up to an hour.

What you’ll see, if you have a problem with candida, is stringy bits of saliva traveling down into the water from the saliva that is floating on top.  Or cloudy looking saliva will sink to the bottom of the glass.  You may also see cloudy blobs which appear to be suspended in the water.

If there are no strings and your saliva is still floating after at least an hour, you may have no candida problem.

If you think you have a problem with candida overgrowth, make sure you see a naturopath for a treatment plan which includes the anti-candida diet, and can include special herbs, essential oils and homeopathics which will knock it out of your body pronto!

2.  Antibiotic Use in Relation to the Risk of Breast Cancer – http://jama.jamanetwork.com/article.aspx?articleid=198216

GET MY BEST TIPS on healthy ways to beat breast cancer and prevent recurrences by signing up for my free e-newsletters. You can also “like” me on Facebook (Marnie Clark, Breast Health Coach) to get my inspirational snippets, latest news and updates. I promise to do my utmost to keep you informed and empowered on your healing journey… and beyond.