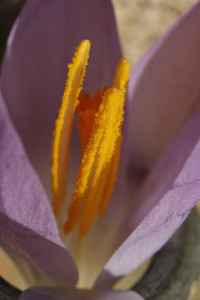 Over the course of this week, I have run across three different articles about saffron, one of which was a newsletter written by naturopath Dr Jacob Schor. When such things happen, I never feel like it’s a coincidence, I sit up and pay attention. This little plant has some quite wonderful healing qualities I would like to share with the breast cancer community.

Saffron (Crocus sativus) has been used traditionally as a highly-valued spice, expensive due to the fact that one crocus flower yields but a tiny amount of saffron via its stigma, three brightly colored, fuzzy, hair like extensions that are fairly labor intensive to harvest. It is considered to be the most expensive spice in the world.

We are discovering that saffron is much more than a spice, however, it is the subject of many recent research studies which are touting its ability to ease depression, anxiety, obsessive-compulsive disorder, Alzheimer’s Disease, and even cancer. In addition, a recent study published in September 2015 indicated that saffron also exhibited a range of other useful actions for such things as coronary artery disease, hypertension, stomach disorders, dysmenorrhea, learning and memory impairment, and it has anti-inflammatory, anti-convulsant, anti-atherosclerotic, antigenotoxic and cytotoxic activities. 1

Interestingly, researchers are using not only the stigmas of the crocus but also the flower petals.  Some of the bioactive constituents of saffron include molecules called safranal, crocetin, crocine, and satiereal.

The reason I’m sharing this information in this website, however, is that I believe saffron could have some beneficial things to offer the breast cancer patient.

The 3 Best Reasons to Take Saffron For Breast Cancer

1.  Better Than Anti-Depressants – Many women taking Tamoxifen suffer from depression, it is one of the known side effects of this hormone blocking medication. As if having breast cancer weren’t depressing enough! Many oncologists then prescribe anti-depressant drugs in the form of SSRI (selective serotonin reuptake inhibitors) for their patients taking Tamoxifen to help relieve the depression. However, some studies indicate that certain anti-depressants can interfere with a particular enzyme (CYP2D6) produced by the liver, rendering Tamoxifen ineffective. Human clinical trials have been carried out which indicate saffron is extremely beneficial for the treatment of depression. 2, 3  2005 research comparing saffron to fluoxetine (Prozac) found that a 30 mg capsule of C. sativus was just as good as 20 mg of Prozac in relieving mild to moderate depression. 4

Anti-depressants tend to have a wide range of problematic side effects including sexual dysfunction, nausea, headaches, weight gain, agitation, nervousness, and even suicide. According to Dr Schor, “These same antidepressants may reduce bone growth. Though not proven, slowing bone growth, aside from contributing to osteoporosis, may have another problem as it is generally believed that this could favor growth of cancer metastases in the bone. We would prefer bones to be growing fast and staying strong.”

2.  Weight Loss – We know that obesity is one of the risk factors for breast cancer. In addition, after going through the gamut of treatments for breast cancer, many also have a tendency to gain weight, and this is a problem particularly with hormone driven breast cancer because adipose tissue (fat cells) create estrogen. Saffron contains a phytochemical called satiereal, which in a clinical trial was able to help decrease food cravings, overeating, and between-meal snacking for a group of mildly overweight, female volunteers. They lost an average of 2 pounds after 8 weeks, no special diet was employed. 5

3. Anti-Cancer Effects – This is the exciting bit (I saved the best for the last!). Several key phytochemicals within saffron block the development, growth and spread of cancer in 5 big ways:

Four Ways To Get Saffron Into Your Body

1.  Ingest it – Just cook with it. Although this is the easiest method, it is also more difficult to get a therapeutic dose.

“In order to make a month’s supply of saffron tincture purchase 1 gram of saffron. Put the saffron in a one-ounce dropper bottle. This takes patience.  I find a funnel and chop stick (used to jam the threads) aid the process. Add one tablespoon of boiling water. The funnel helps here as well.  Let the saffron steep in the water for several hours. Now add one tablespoon of distilled alcohol –  brandy, whiskey, gin, Everclear, vodka (it’s your choice). You should let the mixture sit for a few days, but I rarely bother.  The 30 mg/day dose of saffron used in the research studies on depression equals slightly more than 18 drops of this extract per day. There is no known toxicity to saffron that we know of so one can certainly take more than this.”

3.  Dr Mark Davis, a naturopath in Portland, Oregon has patients make a cup of saffron tea daily with about 10 strands of saffron in it.

4.  Take Optimized Saffron, available from a reputable source and not terribly expensive.

1.   The Effects of Crocus Sativus (Saffron) and its Constituents on Nervous System: a Review –  http://www.ncbi.nlm.nih.gov/pmc/articles/PMC4599112/

4. Hydro-alcoholic Extract of Crocus Sativus L. Versus Fluoxetine in the Treatment of Mild to Moderate Depression: a Double-blind, Randomized Pilot Trial – http://www.ncbi.nlm.nih.gov/pubmed/15707766