Herceptin and HER2 + Breast Cancer – Is It Effective? 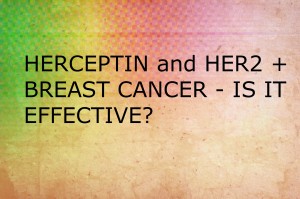 Herceptin and HER2 + Breast Cancer – Is It Effective?

I have had a couple of questions about HER2 positive (“HER2 +”) breast cancer and the drug known as Herceptin, or trastuzumab, and its effectiveness.  I did a bunch of research, here’s what I found out.

HER stands for human epidermal growth factor, and it is a protein that can affect the growth of some breast cancer cells.  It is actually found on the surface of healthy breast cells — in a healthy breast there will be approximately 20,000 HER2 receptors, but when the cells are creating too many copies of this protein, known as overexpression, which occurs in approximately 25% of patients, there can be over 2 million receptors and that’s important because overexpression of the HER2 protein, as well as amplification of the HER2 gene, have been associated with impaired prognosis in patients with both early and advanced breast cancer.

How HER2 + Breast Cancer Is Different

The HER2 gene makes a protein which creates a receptor that sits on the outside of a cell.  HER2 receptors act like antennae on the surface of cells and they receive signals that stimulate the cell to grow and multiply.   Breast cancer cells with too many HER2 receptors receive too many growth signals and thus start growing and multiplying too quickly.  Left untreated, this form of breast cancer can progress rapidly.

Herceptin is a monoclonal antibody, or MAB, made by Genentech BioOncology.  MABs are a type of biological therapy made in a laboratory.  Monoclonal just means all one type.  MABs are designed to recognize and attach to specific proteins on the surface of cells.  Each MAB recognizes one very particular protein, in this case, the HER2 receptor.

Once Herceptin attaches itself to the HER2 receptor on the outside surface of breast cancer cells, it blocks them from receiving growth signals and flags it for destruction by the immune system.  It also blocks HER2 signalling within the cell, thus slowing or stopping the growth of the breast cancer.   According to Genentech BioOncology, the drug can also increase the effectiveness of other chemotherapeutic agents and it is designed to be used in combination with other chemotherapeutic drugs.

That’s a good question.  I will share the results of two studies I found: Efficacy and Safety of Herceptin (Humanized Anti-HER2 Antibody) As A Single Agent In 222 Women With HER2 Overexpression Who Relapsed Following Chemotherapy For Metastatic Breast Cancer.  Click that link to view the full PDF article.  You can print it out and take it to your doctor to explain the medical jargon.  If I read this correctly, the women in the study had metastatic breast cancer (meaning the cancer had already moved to other parts of the body) and so the results won’t be as good as for patients whose disease was caught at an earlier stage.  In this study, “57% of the responding patients were known to be free of disease progression at 12 months or more of follow-up.”  You can draw your own conclusions from that.

The second article appeared on the National Cancer Institute website:  Trastuzumab after Chemotherapy Is Effective in HER2-Positive Breast Cancer which discusses the Herceptin Adjuvant (HERA) trial reported in Lancet Oncology on February 25, 2011.   In this Italian study, 1,703 women received one year of adjuvant therapy with Herceptin (trastuzumab) while another 1,698 women were placed in an observation group.  Four years later, 79% of women in the Herceptin group were disease-free, compared with 72%  in the observation group.

Am I crazy or is that only a difference of 7%?  Not exactly huge, is it?  Especially considering that a one year course of Herceptin treatment costs about $70,000 in the United States, and that it comes with a long list of side effects, which include flu-like symptoms such as fever, nausea, vomiting, infusion reactions, diarrhea, infections, increased cough, headache, fatigue, shortness of breath, rash, low white and red blood cells, muscle pain and, in 5-30% of patients, heart damage, especially when combined with the chemo drug Adriamycin.

2015 Update: I have written a follow-up to this post:  Herceptin and HER2 Positive Breast Cancer – Is It Effective – Part Two.