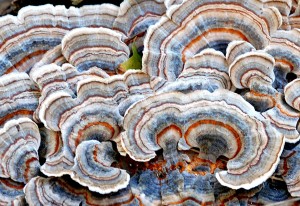 The prestigious naturopathic university in Washington state, Bastyr, in collaboration with the University of Washington and others, was approved to conduct a study on turkey tail mushrooms (trametes versicolor) to discover whether they can help cancer patients boost their immune systems during chemotherapy.

Trametes Versicolor, A Much Studied Mushroom

Trametes versicolor, along with many other medicinal mushrooms, are a rich source of immunoceuticals, nutrients that have immune boosting properties.  The polysaccharides extracted from certain mushroom species have been some of the most thoroughly studied natural products in both preclinical and clinical studies.

The turkey tail mushroom has been used for centuries to treat illness in various parts of the world, primarily Asia.  Numerous research studies have also been carried out in Asia.

So why are they doing more studies on it?  It appears that there are plenty of studies, over 146, in fact, according to a study abstract titled Trametes Versicolor Mushroom Immune Therapy In Breast Cancer.

It would appear that it has been proven that turkey tail mushrooms are a potent immunity stimulating substance!

Well, here’s the deal. The FDA-approved study being carried out by Bastyr is for patients with advanced prostate cancer to ascertain whether turkey tail mushrooms can assist with immunity when combined with conventional chemotherapy. They not only want to measure the immune boosting function of the mushrooms, but also to see if there are any interactions with chemotherapy drugs.

Study participants were recruited at the Seattle Cancer Care Alliance and the plan was to have some of the patients take oral doses of a Japanese turkey tail extract along with docetaxel chemotherapy, while others would only receive a placebo and chemotherapy.  The researchers would then determine safety, measure the levels and activity of natural killer (NK) cells and other immune cells, which typically plummet after chemotherapy, leaving the body vulnerable to disease and opportunistic infections.

The ultimate goal, according to the Bastyr press release dated  November 30, 2012, is to develop a cancer therapy that does not have the debilitating side effects of pharmaceutical drugs.

So I thought I would check on this and see what happened.  I am waiting for a reply from Bastyr University and we might know nothing until after the first of the year.  I promise to update you when I’ve heard from them.

In the meantime, here is a great article dated June 5, 2012 from Paul Stamets, a mycologist and author of six books on medicinal mushrooms, writing for the Huffington Post: Turkey Tail Mushrooms Help Immune System Fight Cancer.

Mr Stamets’ own mother used a combo of chemotherapy drugs along with turkey tail mushrooms to blast a 5.5 cm tumor that had spread to other parts of her body.  She was considered by her oncologist to be Stage IV with 3 months to live.  She took 8 turkey tail mushroom supplements each day, along with Taxol and Herceptin, and is now in complete remission.  Here’s a moving YouTube video where he talks about it.

Building a strong immune system is vitally important when fighting breast cancer.  If you’d like to know the best way to go about it, see my page 8 Ways To Build A Super Strong Immune System.