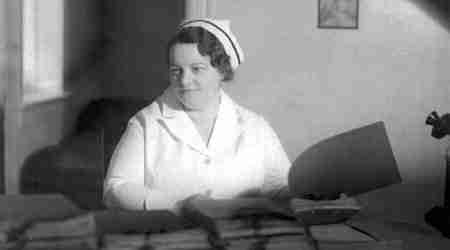 I will preface this article by stating that I have not used Essiac tea personally, but I do know of a few people who have used it and loved the benefits they felt from it.  They weren’t trying to cure cancer, but did have other health complaints which appeared to be alleviated by drinking the tea.  I am sharing this with you because it is such an interesting story and I believe, from what I do know about it, that Essiac tea could be a very powerful natural remedy.

In 1922 Rene Caisse, a Canadian surgical nurse working in a Haileybury, Ontario hospital, had a chance encounter with a prospector’s wife who had survived breast cancer some 30 years earlier.  This woman told Nurse Caisse of an Indian friend from the Ojibwa tribe who had offered to help her heal a breast tumor with herbal medicine.  This woman and her husband then went to a doctor who confirmed the diagnosis of advanced cancer and told her the breast would have to be surgically removed.  She opted instead to take her chances with the Indian medicine man, and the woman returned to his mining camp and drank the recommended brew daily.  Her tumors gradually shrank and then disappeared and when Caisse stumbled across her, she was still cancer free.

Nurse Caisse decided that if she were to ever have cancer, she would try the remedy herself.   She got her chance shortly thereafter in 1924 when her aunt was diagnosed with advanced stomach cancer.  Remembering the Ojibwa brew, Nurse Caisse asked her aunt’s physician, Dr R O Fisher, for permission to try it on her dying relative.  Dr Fisher consented, and Nurse Caisse gathered the herbs to brew the tea.  After drinking the herbal concoction daily for two months, Caisse’s aunt got well and went on to live another 21 years.

Soon Nurse Caisse and Dr Fisher teamed up to treat cancer patients who had been written off by their doctors as terminal.  Many of these patients, too, showed dramatic improvement.

The Herbal Remedy Gets A Name

Nurse Caisse named the herbal remedy Essiac, her own named spelled backwards.  She continued helping these patients no one else could help.  She treated hundreds of patients from her home, not charging for her services or for the Essiac remedy, she lived mainly by donations which were her only income and they barely kept her above the poverty line.

She noticed that she wasn’t able to save everyone, that the herbs could not undo severe damage to organs like heart and lung and liver, but she did notice that the pain of their illness was definitely eased, and the patient often lived longer than predicted.  In most other cases, however, where life support organs had not been severely damaged, the cure was complete and patients often lived another 35-40 years.

When, over many years, word of her good work began to spread, the Canadian medical establishment did not like it one bit.  Thus began many years of harassment and persecution by the Canadian Ministry of Health and Welfare and she spent many years defending herself from this persecution.  Canadian newspapers documented Caisse’s struggle and this, along with the testimonials by some of the patients she had treated, had the effect of making her famous throughout Canada.

Eventually the Royal Cancer Commission became interested in Rene Caisse and her work.  They decided to study Essiac and in 1937 the Royal Cancer Commission conducted hearings on Essiac.   Many testimonials came in from Caisse’s cured patients that Essiac was a cure for cancer and in 1938 the Canadian Parliament voted on legislation that would, if adopted, legalize the use of Essiac.  A petition containing 55,000 signatures was presented to the parliament and the vote was close, but Essiac failed by 3 votes to be approved as an officially sanctioned treatment for cancer.

In the 1960’s, Nurse Caisse worked with a well-known clinic in Massachusetts, the Brusch Clinic.  Dr Charles A Brusch was the personal physician for President John F Kennedy, and Dr Brusch apparently cured his own bowel cancer using Essiac alone.  After researching the herbal remedy for 10 years, Dr Brusch stated: “Essiac is a cure for cancer, period.  All studies done at laboratories in the United States and Canada support this conclusion.”

Rene Caisse continued her work for 40 years, until her death in 1978.  You can read all about her story in the book titled The Calling of an Angel by Dr Gary L Glum. It is a fascinating story.

The Benefits of Essiac

From the studying I have done on it, Essiac appears to have many benefits, but the main ones include:

1.  Preventing build-up of fatty deposits in arterial walls, heart, kidney and liver
2.  Regulation of cholesterol levels by transforming sugar and fat into energy
3.  Destroying parasites in the digestive system and throughout the body
4.  Counteracting the effects of aluminum, lead and mercury poisoning
5.  Nourishing and stimulating the brain and nervous system
6.  Promoting the absorption of fluids in the tissues
7.  Removing toxic accumulations in the fat, lymph, bone marrow, bladder, and gut
8.  Neutralizing acids, absorbing toxins in the bowel and eliminating both
9.  Clearing the respiratory passages by dissolving and expelling mucus
10.  Helping the liver detoxify by helping to convert fatty toxins into water-soluble substances that can then be eliminated through the kidneys
11.  Increasing the body’s ability to utilize oxygen by raising oxygen level in cells
12.  Increasing the production of antibodies like lymphocytes and T-cells in the thymus gland, helping the immune system
13. Inhibiting and possibly destroying benign growths and tumors
14.  Purifies the blood

Sounds incredible that four simple herbs could do so much in the body.  Herbalists believe that the synergistic interaction of the four herbs contributes to their therapeutic effects.  Some research has been carried out on the individual components of the remedy and these studies indicate that both burdock and the turkey rhubarb root have anti-tumor properties.  But it appears to be the combination of the herbs that has the best effect.

Of course the medical establishment continues to diss Essiac, saying that there is “a lack of high-quality clinical trials to substantiate any of Essiac’s traditional uses”.  But since herbs can’t be patented who would pay for such a trial?   I even found on the Cancer Research UK website the remark: “…in many cases, it turned out that either the diagnosis was wrong in the first place, or that conventional cancer treatment was more likely to have been the reason for the cancer disappearing.”  Yeah, right.

Essiac is now apparently owned by a commercial company and their lawyers require the statement “Essiac is the registered trademark of Essiac Products Inc” whenever it is written about.  One thing I have learned over the years is that the original formula has been altered by subsequent makers of it, sometimes due to inabilities to get the original ingredients, sometimes due to their own research which indicated the substitution was for the better.  If you should decide to give this herbal remedy a try, just ensure that the maker of it knows what they are doing and is adhering to the original recipe as closely as they can.

From the research I have done, this appears to be the original recipe:

Mix thoroughly the dry ingredients in a bowl, then pour the dry mixture into a wide-mouth glass jar and shake it well.  Mix 1-1/2 quarts of distilled water to every ounce of the dry mixture and boil it up in a stainless steel, lidded pot. After boiling hard for 10 minutes, turn off the heat, scrape down the sides of the pot, and stir well. The pot then sits for 10-12 hours. To preserve the supply, you must sterilize the implements and reheat the liquid until it is steaming hot, but not boiling.  Strain the mixture and put it in sterilized bottles. Tighten the cap of the bottle and then set aside to cool.  Once the bottles are opened, they should be refrigerated, but not frozen.

To take Essiac, one should:

Disclaimer: Essiac tea is not FDA tested and has not been FDA approved as a treatment or cure for any health problem, including cancer.  I do not represent it as such on this site. You must determine whether Essiac is a treatment method you should attempt.  Always consult your health practitioner before undertaking any treatments for your health.