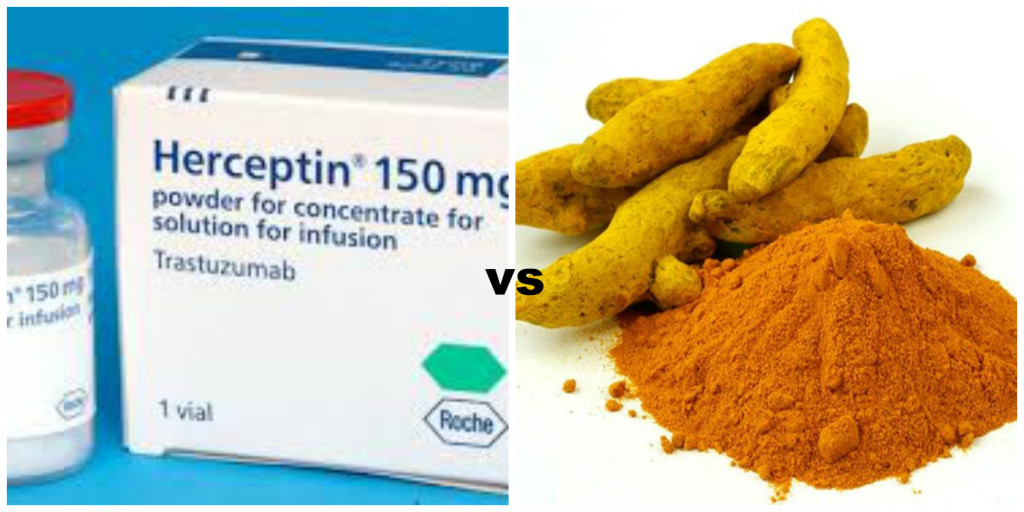 While doing some research for one of my newsletters about curcumin, the pigment derived from the root spice turmeric, and its good effects for breast cancer, I ran across a study on curcumin that had some great information for those with HER2 positive breast cancer.

About 15-25 percent of breast cancer patients are HER2 positive, meaning that their tumors have an overexpression of this oncoprotein which researchers have observed is associated with a poor prognosis, increased disease recurrence and metastases. One of the drugs that has been created to address this problem is trastuzumab, also called Herceptin.

There is little doubt that Herceptin is saving lives, but there’s a problem for some people.

Quite a few women have contacted me from various parts of the world where Herceptin is either not available or too expensive – Africa being the main location where this is happening. These women have been diagnosed with HER2 positive breast cancer and are quite concerned that Herceptin is not available for them.  Another couple of problems exist as well. The tumor cells of some women have a resistance to Herceptin. And for some, Herceptin is too hard on their heart and/or lungs. So it is for these women that I am sharing this information.

The study I read was released in 2012 and its title is “The Potential Utility of Curcumin in the Treatment of HER-2-Overexpressed Breast Cancer: An In Vitro and In Vivo Comparison Study with Herceptin” [1].

As denoted by the title, the study was both an in vitro (test tube) study and in vivo (in body – with animals) study done with various lines of breast cancer cells and on mice. I believe the results are very interesting and are certainly worth considering, especially in view of the fact that not everyone has access to the drug Herceptin, some are resistant and some are just not able to tolerate it. These people need Herceptin alternatives.

Researchers wanted to gain some insight about what worked best for tumors that overexpress the HER2 oncoprotein. So they divided up various lines of breast cancer cells (listed below) in test tubes and also test animals into 8 different groups:

Also, researchers noted that curcumin had the ability to inhibit Herceptin-resistant breast cancer cells (SK-BR-3). This is of great importance to those who are HER2 positive but who are resistant to Herceptin. Researchers stated “The ability of curcumin to downregulate EGFR and HER-2 oncoproteins and inhibit the phosphorylation of Akt and MAPK and NF-kB activation suggests that curcumin has potential in the treatment of HER-2-overexpressed and/or herceptin-resistant breast cancer.”

In the animal study, curcumin treatment effectively reduced the tumor size by 76.7%, compared with the control; however, it was not as effective as Herceptin, which achieved an 86.7% tumor reduction.

Researchers also revealed that the combination of Herceptin and curcumin showed a greater antitumor effect than curcumin alone (87.5% versus 76.7% in tumor regression).

In the animal study, the combination of curcumin with Taxol had an antitumor effect comparable with combining Taxol and Herceptin, which is one of the current preferred chemotherapy regimens for those with HER2 positive breast cancer. The combination of Taxol, Herceptin and curcumin was associated with the smallest tumors, but was not “statistically different” from that of the Taxol and Herceptin regimen.

In conclusion, I believe this study is significant. In people who do not tolerate Herceptin well or are unable to get this drug due to finances or geographical location, or for those whose tumor cells are Herceptin resistant, according to this study, the combination of Taxol and curcumin is just as good as combining Taxol and Herceptin.

2021 Update: We now have a 2020 study [2] which discusses the fact that previous studies on curcumin and HER2 signalling used extremely high doses of curcumin – doses that might not be attainable for normal human beings. So the researchers set out to see if lower doses of curcumin would also have a good effect. They found that lower concentrations of curcumin (and also quercetin and a berry fruit extract) not only were effective at reducing HER2 signalling, but also worked synergistically with Herceptin to increase the effectiveness of that drug.

For dosage advice of curcumin, see my article: Harvest The Power Of Curcumin To Kill Breast Cancer Cells.

References:
[1] The Potential Utility of Curcumin in the Treatment of HER-2-Overexpressed Breast Cancer: An In Vitro and In Vivo Comparison Study with Herceptin – http://www.hindawi.com/journals/ecam/2012/486568/