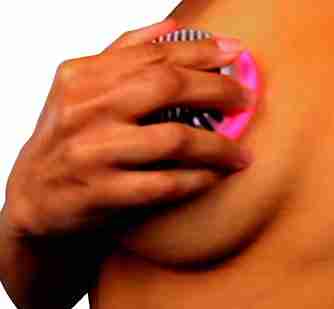 Ever on the outlook for awesome products for my people going through therapies for breast cancer, I wanted to share with you a unique product  that has recently come to my attention called Kool Relief. It was designed using thermodynamics to ease the damage to skin and underlying tissues that occurs during radiotherapy sessions. First a brief explanation of how radiation burns occur.

Radiotherapy targets cancer cells but can also damage or kill off healthy cells. Radiotherapy is administered in repeated doses over a period of days or weeks, and it can cause problems for the body’s natural repair processes because the skin exposed to the treatment is damaged faster than it can repair itself.

Treatment-related factors that can increase the risk and severity of skin reactions include high cumulative doses, the type of beam used to deliver the radiation, a large treatment field, treatment to areas with skin folds such as under the breast, and delivery together with certain chemotherapy drugs. Moderate to severe reactions can occur toward the end of radiotherapy treatments, weeks after treatment, or with a cumulative radiation dose of 45 to 60 Gray (Gy), a measure of radiation dose.

Radiation Dermatitis Can Occur and it Hurts!

One of the most common side effects of radiation therapy is a skin condition called radiation dermatitis. This can range from a mild, red rash, known as erythema, and/or itchy, peeling or flaking skin known as dry desquamation, to a more severe reaction with blisters and wet, peeling skin, known as moist desquamation. These are a direct result of radiation, the symptoms can take up to 90 days to show up, and they an be quite painful.

Another reaction can occur, called radiation recall, which is a rash that looks like a severe sunburn. Although rare, it occurs when certain types of chemotherapy are given during or subsequent to external beam radiation therapy. The rash appears on the part of the body that received radiation and symptoms may include redness, tenderness, swelling, wet sores, and peeling skin. Typically, these side effects start within days or weeks of radiation therapy. But it can also appear months or years later.

Damage from radiation therapy doesn’t end with the skin. Damage  can also occur along the entire radiation beam’s path, resulting in burns and irritation even to underlying tissues. The burned and irritated tissue generates heat that overtaxes the body’s natural defenses because the body has no natural method of efficiently ridding itself of concentrated heat in tissues. Thermal testing during radiation therapy shows that temperatures can rise 4 to 8.5 degrees in radiation-treated tissue over the patients’ body baseline temperatures.

Doctors offer only over-the-counter pain killers and skin care products for radiation burns, many of them full of toxic chemicals. Applying these products to the skin does not provide instant pain relief, and for some the discomfort is excruciating. Even moderate radiation burns can affect a patient’s comfort and quality of life and can be an obstacle to the healing process for an already vulnerable patient. For those unlucky enough to experience severe radiation burns, treatment  may be delayed or changed, and that can compromise the effectiveness of such treatment.

Kool Relief to the Rescue

Kool Relief is the brainchild of inventor Mark LeLong, as the result of having a loved one diagnosed with breast cancer. When she went through radiotherapy and had the resulting radiation dermatitis, Mark decided he could do something about that. He had thorough knowledge of engineering principles and thermodynamics. He researched how best to draw heat from burned tissue, and the most efficient mechanism he found for heat exchange was the heat sink.

A heat sink is best known for its use in computers. It is a passive heat exchanger that transfers the heat generated by an electronic or a mechanical device to a fluid medium, often air or a liquid coolant, where it is dissipated away from the device, thereby allowing regulation of the device’s temperature at optimal levels.

Further study and research found that medical grade aluminum could serve as an efficient heat sink for the human body. Adding the ‘blades’ into the design increased the surface area to carry out heat exchange more rapidly. Mark tested the device with his loved one, and it provided the immediate relief he had hoped for. More volunteers were enlisted, and test results again and again proved the device to be immensely successful. 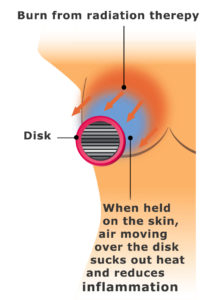 urns directly by employing a basic first aid rule, ‘Cool the burn and avoid the pain.’ Kool Relief’s design forces damaging, painful heat to travel away from tender skin and tissue. Once heat is removed, all that remains is cool comfort. Rapid heat removal saves healthy tissue from damage and  pain.

When the smooth, cupped side of the Kool Relief disk is applied to the burned area, heat is absorbed into the device, passes through the opposite side and dissipates into the air. The disk never gets hot, and the body feels a cool sensation that calms and soothes away pain and discomfort. 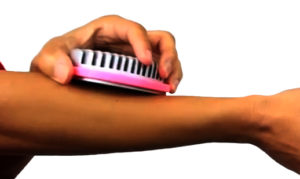 · Provides rapid, completely natural, non-chemical relief for radiation burns on any part of the body;
· Is always cool to the touch without refrigeration, but never cold as ice. If it gets warm you just wave it in the air for a few moments and that cools it down again;
· Is compact and portable, with a discreet design for privacy and ease of use;
· Can be used during and after radiotherapy treatments.

It’s a pretty cool little unit. It’s hand-machined from medical grade aluminum alloy, it’s dishwasher safe, it has no moving parts or electronic parts so it will not need to be repaired, serviced or replaced, it uses no batteries or electricity,  and it’s completely recyclable so it’s environmentally friendly.  All in all, a unique product and people are loving the relief they are getting. For more information, go to the Kool Relief website.

GET MY BEST TIPS on healthy ways to beat breast cancer and prevent recurrences by signing up for my free e-newsletters and e-books on the right.  You can also “like” me on Facebook (Marnie Clark, Breast Health Coach) to get my inspirational snippets, news and updates.  I promise to do my utmost to keep you informed and empowered on your healing journey… and beyond.