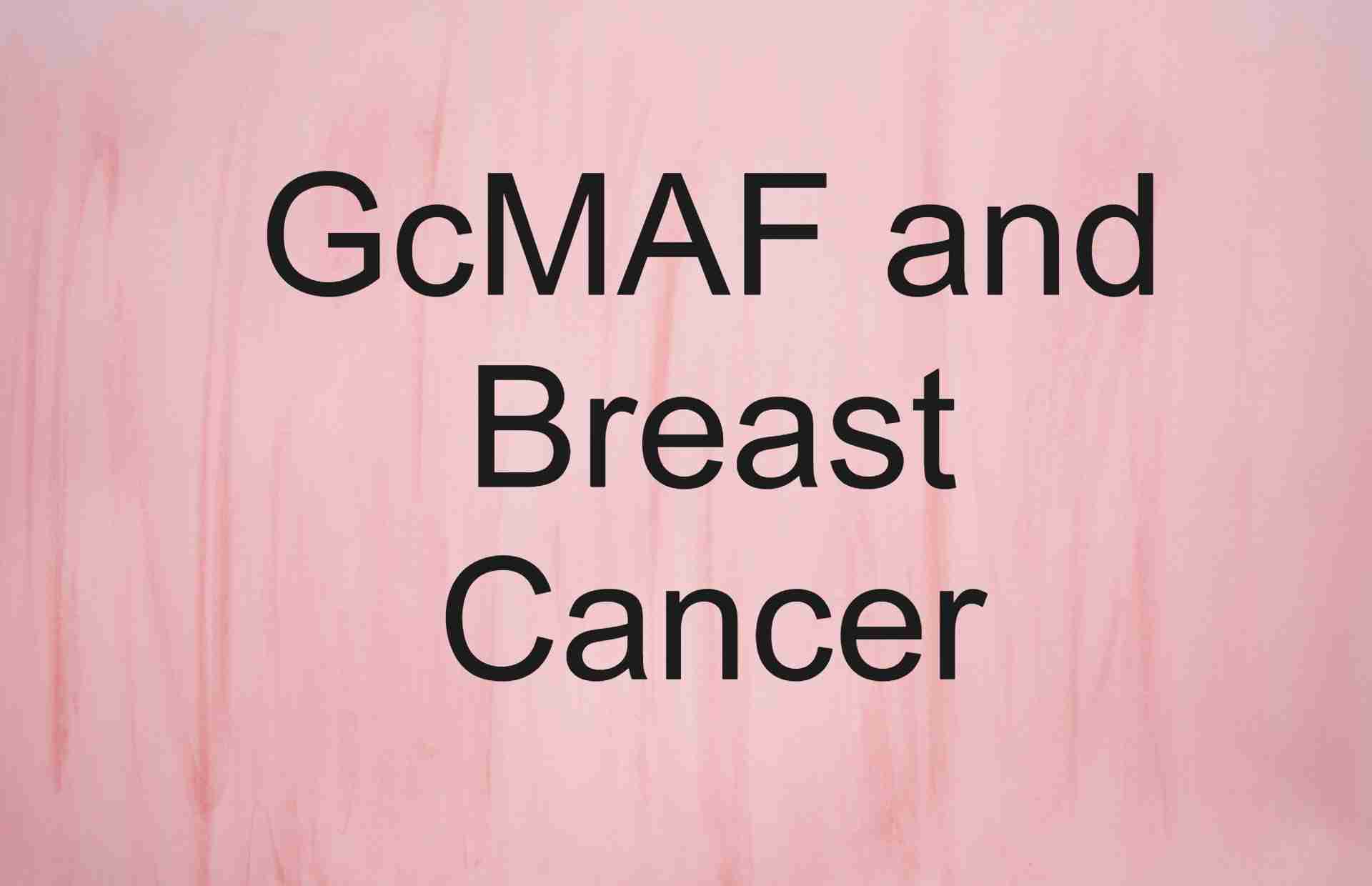 One of my thrivers recently asked me to look into a therapy called GcMAF. While I was aware of it, I haven’t written about it, so in this article I’ll cover what GcMAF is, what it does, and whether it has applications for breast cancer.

GcMAF is a multi-functional protein in the body so it’s not a treatment, per se, but rather a complex vitamin protein molecule naturally produced inside the small intestine of healthy people.

What Does GcMAF Do?

GcMAF is responsible for initiating and regulating several important cellular and neurological functions within the body. One of its most important functions is its ability to activate macrophages, a crucial form of white blood cell in the immune system whose job it is to eat up whatever tumor cells and viruses it encounters in the bloodstream or in other tissues (think “Pac Man”).

When we stop naturally producing GcMAF, which can occur in a depleted immune system, we also stop activating macrophages.

The Theory Behind Using GcMAF as a Cancer Therapy

Tumor cells release a protein known as nagalase. Nagalase, which is short for alpha-N-acetylgalactosaminidase, is an enzyme made by cancer cells and viruses to sabotage the host’s immune response. In effect, nagalase puts macrophages to sleep.

We can test for nagalase, a simple blood test will advise nagalase levels. An elevated level can indicate the very earliest beginnings of either a developing tumor or a virus.

The position of some researchers is that reintroducing GcMAF to rebuild an ailing immune system enables that person to better fight cancer. GcMAF was never intended to be a stand-alone treatment, but rather for use alongside other treatments, both conventional and natural.

The Research on GcMAF

Although GcMAF is not approved for use in the USA, some European doctors have been utilizing it. One of my former Swiss clients briefly had GcMAF therapy, which she described as expensive.

Here’s what I discovered.

Several studies authored by Dr Nobuto Yamamoto from 2007-2009 on GcMAF and cancer and HIV (studies which had the alternative medicine world very excited) have been withdrawn by the scientific journals in which they were originally published. This occurred in 2014, at the behest of the Belgian Anticancer Fund. There’s a long and interesting article about Dr Yamamoto and GcMAF on Snopes [1] if you want an in-depth analysis on the subject.

A 2012 cell study [2] on breast cancer cells performed by Italian researchers found that in test tubes, GcMAF inhibited angiogenesis (the ability of a tumor to create new blood vessels with which to feed itself), and inhibited the potential of cancer cell proliferation (rapid growth), migration and metastasis (ability to spread to other regions of the body).

A 2013 study [3] done by Japanese researchers (not Dr Yamamoto, to whom I referred above) and published in the journal Anticancer Research was done with actual human patients. Though small in size (345 patients), and used alongside other treatments such as intravenous vitamin C and alpha-lipoic acid, researchers stated that their results were hopeful and promising.

A 2014-2017 phase 1 clinical trial [4] was begun by an Israeli biopharmaceutical company, Efranat Macrophage, on “Modified Vitamin D Binding Protein Macrophage Activator”, which they called EF-022. The trial included subjects with advanced solid tumors and although the trial finished in 2017, no results have been posted.

A 2017 review of studies [5] written by Iranian scientists (often at the forefront of natural medicine research these days) discussed the role that GcMAF may have to play in cancer immunotherapies. They reviewed some of the other research that has been done on GcMAF, noting that most studies have been quite small, and that further studies need to be carried out. However, they did also state that these small studies found that GcMAF may have applications for cancer patients. GcMAF did appear to boost macrophage activity, had anti-angiogenic properties, and inhibited the migration of cancer cells.

A 2020 study [6] investigated GcMAF for autism and ALS patients. However, they were working with a newly developed 25-OH vitamin D binding complex together with GcMAF. They found this new complex worked better at activating macrophages than either vitamin D binding protein or GcMAF on their own.

So I would say, in light of all of the evidence I’ve read, it has not been proven that GcMAF is an authentic and effective therapy against breast cancer at this time. There’s too little evidence, clinical trial results are too small and/or scanty, and although it may well prove to be an effective treatment, it’s just too soon to say for sure. There may well be European doctors using it with their cancer patients – and if there are, I would welcome their experiences here. Please comment below if you have experience with GcMAF, either as a patient or a doctor utilizing it in your practice.

References:
[1] How a Retired Scientist’s Questionable ‘Institute’ Convinced the Internet That Cancer Was Cured – https://www.snopes.com/news/2017/09/05/scientists-questionable-institute-cancer/
[2] Effects of vitamin D-binding protein-derived macrophage-activating factor on human breast cancer cells – https://www.ncbi.nlm.nih.gov/pubmed/22213287
[3] Clinical Experience of Integrative Cancer Immunotherapy with GcMAF –
http://ar.iiarjournals.org/content/33/7/2917.full.pdf
[4] Safety Study of EF-022 (Modified Vitamin D Binding Protein Macrophage Activator) in Subjects With Advanced Solid Tumors – https://clinicaltrials.gov/ct2/show/NCT02052492
[5] Promising role for Gc-MAF in cancer immunotherapy: from bench to bedside – https://www.ncbi.nlm.nih.gov/pmc/articles/PMC5686300/
[6] Vitamin D – Deglycosylated Vitamin D Binding Protein Dimer: Positive Synergistic Effects on Recognition, Activation, Phagocytosis and Oxidative Stress on Macrophages – https://www.ncbi.nlm.nih.gov/pubmed/32013346
GET MY BEST TIPS on healthy ways to beat breast cancer and prevent recurrences by signing up for my free e-newsletters and e-books.  You can also “like” me on Facebook (Marnie Clark, Breast Health Coach) to get my inspirational snippets, news and updates.  I promise to do my utmost to keep you informed and empowered on your healing journey… and beyond.