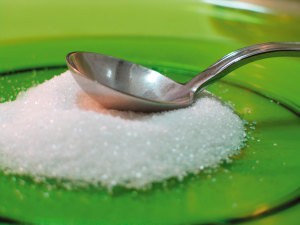 One of the first things I recommend to my clients going through breast cancer is to get sugar out of their diets and I have a good reason for that.  The problem with having too much sugar in your diet, especially if you’ve had or do have breast cancer, is that high insulin levels are associated with a 283% increase in breast cancer risk.  Sugar is also known to depress your immune system by 50-90% for 5 hours after consumption.  It also increases your risk of endometrial cancer.

A study published in the Journal of Nutrition in June 2014 indicated that processed, simple sugars reduced the activity of white blood cells and increased inflammatory markers in the blood.  Neither of which are a good thing if you’re fighting cancer.  Of equal interest was this notation: “Meanwhile, the complex carbohydrate fiber (but not starches), such as that found in fruits and vegetable, appear to reduce inflammation in both humans and mice.” 1

I went into research mode and found quite a few interesting things for you.  There are so many pro- and con- arguments about artificial sweeteners, one could easily be forgiven for getting totally confused.

The website of the Academy of Nutrition and Dietetics Evidence Analysis Library provides us with a “pro” argument.  In an article dated 2011 we are told that “Aspartame is a dipeptide molecule produced by joining phenylalanine and aspartic acid. Aspartame itself does not occur naturally but is a manufactured substance.”  It also states that “The scientific literature clearly confirms that aspartame never enters the bloodstream as aspartame, because it is so rapidly broken down to its constituent parts,” that is phenylalanine and aspartate, two naturally occurring amino acids.  We are also advised that “the human body is well-equipped to use small amounts of methanol produced from foods and beverages, as well as from aspartame. The metabolic pathway is well-understood and well-documented in the scientific literature.  First, the methanol from the intestinal tract goes to the liver via portal blood, where the liver enzyme alcohol dehydrogenase converts methanol into formaldehyde. The body very rapidly uses formaldehyde and so formaldehyde never builds up in the body. If the body doesn’t need it, formaldehyde is converted to formic acid within seconds. The formic acid will be either excreted in the urine or broken down to carbon dioxide and water.” 2

The web article referred to above also tells us “formaldehyde is produced by our bodies every day in amounts thousands of times greater than you would ever get from aspartame, as it is a key metabolite that is needed to make other essential compounds, including DNA.  Also, the known toxic effects of methanol relate not to formaldehyde, but to the build-up of formic acid in the blood.  The breakdown of formic acid is slower than the breakdown of formaldehyde, so if there is a very large dose of methanol (or formaldehyde) coming into the body, formic acid can build up and that causes the adverse effects seen in methanol poisoning.”

Okay, so far so good.  Or is it?  Formic acid is a known irritant – it’s the same chemical produced by fire ants – and I don’t know about you, but I don’t want it in my bloodstream.  Formaldehyde is a known carcinogenic (cancer causing) preservative which causes allergies, contact dermatitis, headaches, and is linked to chronic fatigue and neurotoxicity.

The website WebMD.com has some helpful information on artificial sweeteners.  Here is a link to their discussion of the subject.

The Arguments Against Artificial Sweeteners

There are also plenty of arguments against artificial sweeteners.  Dr Mercola (one of my trusted sources of information) believes that they should ALL be avoided, and he has some good reasons for feeling that way – they decrease your insulin sensitivity, there is no scientific evidence proving that they actually help with weight loss, they inhibit the release of neurotransmitters in the brain, and they push your health in the wrong direction.  He’s written a book about it called Sweet Deception, which I recommend you read.  3

One neurosurgeon in particular, Dr Russell Blaylock, believes there is a connection between a syndrome similar to MS and aspartame.  He calls aspartame a dietary excitotoxin, responsible for the breakdown of the myelin sheath of nerve cells, and also deterioration of the blood brain barrier.  He has written a book about this: “Excitotoxins: The Taste That Kills”.

Subsequent to the Gulf War in the 1990’s there was a huge increase of MS-like symptoms and neurological conditions among returning soldiers and one of the contributing factors to that, it was discovered, was that cases upon cases of sugar-free sodas were left sitting in the hot desert sun waiting for delivery to the various units. Science has discovered that the methanol (wood alcohol) in aspartame coverts to formaldehyde when the temperature of aspartame exceeds 86 degrees Farenheit.  It is felt that the formaldehyde was causing a multitude of the symptoms experienced in these veterans. 4

One small study followed two women who were suffering musculoskeletal pain from fibromyalgia and when the two women discontinued use of aspartame, their pain went away.  5  Not exactly a huge study, but also not to be ignored, I believe.

One interesting argument put forth by Dr Michael Greger over at NutritionFacts.Org is contained in this video “The Neurobiology of Artificial Sweeteners”.  In this video, it is stated that artificial sweeteners can actually cause us to overeat because after consuming them, the gut tells the brain that there is a lack of nutrition.

Another trusted source, Globalhealingcenter.com, tells us that aspartame is “made from the waste product of E. coli bacteria. To be blunt, it’s made from bacteria poop”.  To make matters worse, this bacteria is genetically modified.  6

Are There Safe Alternatives?

Dr Michael Greger at NutritionFacts.org has put together some very helpful information on the subject of artificial sweeteners. See his video “A Harmless Artificial Sweetener”.   It’s nice and short, it will take you less than 4 minutes to view the video.  According to Dr Greger, it appears there is only one artificial sweetener that is considered to be reasonably safe, and that is erythritol.  There is more information about erythritol in this video, also by Dr Greger: “Erythritol May Be A Sweet Antioxidant“.

Stevia Is Not Perfect

Stevia, a sweet herb from South America, has been much studied for benefits and possible health risks.  Stevia  is 330 times sweeter than sugar, so a little goes a long way.  Claiming inadequate safety research, the FDA had long refused the herb from being included on the “generally recognized as safe” (GRAS) list.  However, once Pepsi and Coca-Cola discovered how to manipulate and patent stevia, however, it suddenly became “safe” to use as a sweetener and is now sold on grocery store shelves in packets similar to other artificial sweeteners. The FDA reluctantly added the natural stevia extract to the GRAS list as well.

Here’s a warning.  If you are going to consume stevia, just make sure it’s the natural stevia extract that you use and not the manipulated one which is processed down to sugar alcohols and other compounds known as steviosides and steviol.  The natural one has been utilized by the Paraguayan people for centuries.  Apparently stevia is okay for you if you only have a drop or two on a daily basis.  You just don’t want to cook with it – for instance don’t replace sugar in all of your recipes with stevia. For more information, watch this video from NutritionFacts.org: “Is Stevia Good For You?”

If you are feeling betrayed by companies that claim to have your best health in mind, you should be.  As always – read the labels, people.  Know what things are in the products you buy and know what things can be a problem for your health.  You can’t trust the companies selling the stuff to tell you the truth, and you can’t rely on the FDA to protect you either.

It is obvious that there is a need for further scientific studies.  I believe we are best advised to stay away from artificial sweeteners.  It is far from clear that artificial sweeteners do what they were designed to do.  Or that they are safe.  So in the meantime, until we know for sure, you would do better to avoid them.  Who needs to put something into their body made from the poop of bacteria?

1.  Fast food fever: reviewing the impacts of the Western diet on immunity
http://www.nutritionj.com/content/13/1/61

5.  Aspartame-induced fibromyalgia, an unusual but curable cause of chronic pain
http://www.ncbi.nlm.nih.gov/pubmed/21176433