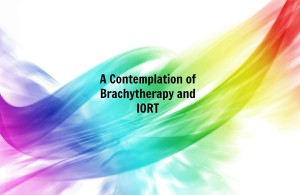 I recently discovered that there are two new-ish therapies available as breast cancer treatments that were not available when I had breast cancer in 2004, known as brachytherapy and intra-operative radiation therapy, or IORT.

They are interesting, but do not come without risk and I thought you should know about them.  This is likely to open up a can of worms, but here goes.

For women who do not need to undergo mastectomy, a lumpectomy is performed to remove a cancerous tumor.  Brachytherapy involves the insertion of either a series of tubes or a catheter attached to a small balloon into the breast.

A radioactive source is then delivered to the surgical site, where it can kill off any remaining cancer cells within about 1 cm.  After five days of treatment, the tubes or catheter can be removed.  This allows doctors to irradiate the breast “from the inside out,” unlike the traditional method of applying radiation to the entire breast with an external beam.

Intraoperative radiation therapy (IORT) is an intensive radiation treatment that is administered during surgery.  IORT is used to treat cancers that are difficult to remove during surgery and there remains a concern that microscopic amounts of cancer may still be in situ.  IORT allows direct radiation to the target area while sparing normal surrounding tissue.

They both sound good, right?  Read on.

In theory, these two therapies seem like a good idea because doctors can basically deliver the whole radiation treatment at the time of surgery or just after, rather than requiring the patient to go back daily for 6-7 weeks.

The problem is that these two therapies still need extensive studies to be done to ensure their effectiveness!  There is a complete lack of randomized trial data comparing the effectiveness of either of these therapies with standard whole-breast irradiation.

Randomized trials can take years, however, and how these treatments have managed to be put forward and offered without those trials is mind-boggling to me.  There is one such trial underway sponsored by the National Cancer Institute, but it will be years before the results are known.

In the meantime, a group of researchers from the University of Texas, M.D. Anderson Cancer Center in Houston and the University of Chicago decided to compare women who had already selected one option or the other to see how they were faring.  They called it a retrospective population-based cohort study, which is not the “gold standard” of research studies, that being the randomized controlled study.  But it was useful information anyway and the results of their research was published in the Journal of the American Medical Association (JAMA) and you can access that study here.

The research team used data compiled by Medicare, and they had a large patient population – 92,735 women treated for breast cancer between 2003 and 2007. The average age for these women was nearly 75, and they were tracked for an average of about 3 years following their radiation therapy.

One interesting thing is that the research showed very clearly the growing appeal of brachytherapy.  In 2003, only 3.5% of women on Medicare chose this treatment, but by 2007 that figure had risen to 12.5%.

Here are the results.  In the 5 years after receiving brachytherapy, 3.95% of these women went on to need a mastectomy, compared with only 2.18% of women who chose whole breast radiation. After controlling for various demographic and other factors, the researchers still found that women who had brachytherapy were 2.19 times more likely to have their breast removed.

Overall, the researchers calculated that “for every 56 women treated with breast brachytherapy, 1 woman was harmed with unnecessary mastectomy.”

There were also more post-operative complications for these women, including infections. In the first year after their lumpectomy, 28% of women in the brachytherapy group had a complication, compared with 17% of women who had their whole breast radiated.

It really isn’t too surprising.  It’s radioactive material that is being inserted into the body, after all.

The good news is that most women survived their breast cancer no matter which type of radiation treatment they chose – 86-87% were still alive after 5 years.

My own personal opinion is that it’s all about quality of life.  Give yourself the best chance you can to survive and enjoy your life.  For me, that choice did not include radioactive material being inserted into me or blasted onto me from above.  Here’s what I did instead.