Putting the Memory Back In Memorial Day 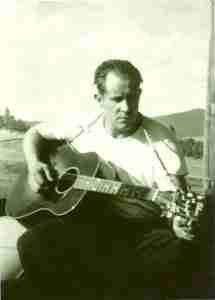 I just found out that Memorial Day started off as “Decoration Day”, which originated after the Civil War to commemorate fallen Union soldiers.

Regardless of your feelings about war and its horrors or the policy makers who promote them, this weekend is a time to honor the men and women who have put their blood, sweat and tears into keeping this country safe.

My father served in the Pacific in World War II and my grandfather served in the trenches of World War I.  Both of them were very good men and neither of them much given to talking about their war experiences, except for just once.  My dad once told me how music had saved his life and I’d like to share that story with you.

My dad was in the US Navy and while I don’t know which ship, he told me he had a friend in sick bay.  Every afternoon, it was his routine to go and visit his sick friend and they’d sit and talk for awhile.  On this one particular day, however, rather than going to sick bay, my dad was really itching to have some time with his guitar – a small one that he’d brought along with him on board.  While he was sitting and quietly strumming his guitar, a Japanese kamikaze plane hit the side of the ship, killing and injuring just about everyone who was in the sick bay.  If he’d been there, he would have died as well.

That story really made me think.  What if he’d denied himself that little bit of time with his beloved guitar?  That story still serves as a reminder to me – the biggest thing I took away from it is how precious our time is, how we really shouldn’t deny ourselves little pleasures, how listening to that inner voice serves us so well.

I never got the chance to say “Thanks” to my dad for his Navy service, but he probably wouldn’t have expected it.  He was a great father, he died in 1996 in his 80’s.  I still miss him.  I still miss my grandfather too, another amazing man.

So to all of those service people I’d like to say a hearty thank you for all that you do.  It doesn’t go unnoticed.  We appreciate you.